Tradies are one of the most diverse groups of workers in Australia. They can be anyone from construction workers to gardeners and even couriers, each with their own specifications on what they need out of a ute. This variety has caused the long-standing debate on whether steel or aluminium trays are better. In truth, each tray has advantages and disadvantages depending on where the ute is supposed to operate. If you’re currently thinking about hiring a ute, here are a few points to consider about trays.

The main impact is an exponential increase in fuel consumption and mechanical/tyre wear. This problem amplifies if you’re driving a tradie ute with a petrol engine that has less fuel efficiency. Moreover, moving beyond this is the fact that ute trays are a part of kerb weight which means a reduced GVM (Gross Vehicle Mass) rating and payload. If you are a courier that needs to transport a certain number of items or a construction worker with several materials, this can be a pressing issue. An aluminium ute tray provides a lighter kerb weight, perfect for the increased payload capacity.

That’s not to say that the extra weight of a steel tray is a disadvantage in all situations. As most tradies have probably experienced, driving utes with lighter or unladen loads can be particularly troublesome. The spring-loaded rear suspension often means a stiff and bumpy ride. A steel tray on your ute will compensate thanks to its increased weight, leading to a smoother ride.

Comparisons have shown that steel is generally four times stronger and three times stiffer than aluminium. These properties are due to more carbon being present, increasing the metal’s tensile strength & durability.

Therefore, steel trays are often the standout choice for transporting items in rougher conditions due to their strength and hardness.

However, heavy-duty aluminium trays can still be considered, as they technically have a higher strength-to-weight ratio making them more than adequate when choosing a ute for rent.

In general, though, tradies looking to move around heavier items that can bump into each other should investigate steel trays first, given that they are far less likely to be dented or marked.

The other main advantage of aluminium over steel is that it is naturally corrosion resistant. The high bauxite content makes it non-ferrous & rust-free as opposed to steel which contains iron and carbon.

Corrosion resistance is critical for vehicles, reducing maintenance costs, especially if you’re someone working along the coast where exposure to sea air and saltwater is high.

On the other hand, unsealed mild steel will start to show rust almost immediately when outdoors. This means steel trays often need a layer of treatment such as powder coating or paint to help prevent damage which adds another consideration to maintaining the ute. Fortunately, the steel used to make ute trays is often quite thick, reducing the chances of rust affecting the structural integrity.

There are several pros and cons to using aluminium or steel ute trays. Ultimately, where and what you need the vehicle for is the deciding factor. Aluminium trays are perfect for those looking to increase vehicle weight whereas steel trays handle better in harsh environments.

TradieSpec is a trusted ute hire company in Sydney that provides vehicles with heavy-duty trays & specifications tailored to your needs. 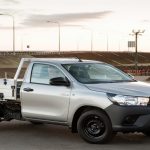 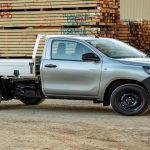 Top Tips To Consider When Hiring A Ute